The salad of kosambari, which is served at lunchtime during summers. The main components are Lentil, onions, coconut, and tomatoes.

It may serve with hot curries or samosas. The kosambari salad is also served with puffed rice or it can be served as an appetizer.

This lentil salad recipe is a very popular delicacy among South Indians. You can serve the salad as is or you can also make it more colorful by adding some fresh greens or chilies, coriander leaves, mint, or cumin seeds, or coconut pieces. The salad of kosambari can experiment with different combinations and ingredients to make it more appealing.

The typical south Indian lentil salad recipe is very rich and complex, the ingredients and techniques used are different for every recipe.

The authentic South Indian cuisine is a combination of almost 80% spices. The spices of tempered masala, which are using the best and purest spices that have been used for centuries in the old recipes of South India. 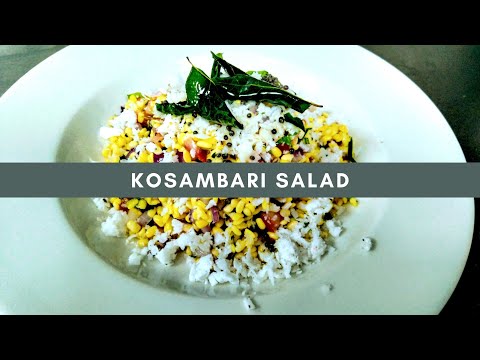 The Nutrition of Lentil Salad

The salad of Lentil Recipe(kosambari) is a high-protein food. It has more protein than any other vegetable or legume and it also contains a large amount of fiber.

In addition to all of those great benefits, lentils have another great benefit – they are a great source of iron. In fact, studies have shown that a diet high in iron and protein can reduce the risk of serious illnesses including colon cancer.

One word of caution about the nutrition of lentils – don’t overcook it. If you overcook them, they will lose their wonderful nutritional value and become dry instead of tasty. I find it best to let them cook for a few minutes rather than cooking them rapidly.

My food blog is all about cooking, food, and healthy living. You’ll find recipes for every meal of the day and tips for new recipes Ideas.

This site uses Akismet to reduce spam. Learn how your comment data is processed.